Inaugural Address by Comrade Dipankar Bhattacharya, General Secretary, CPI(ML) delivered at the inaugural session of the 10th Congress of CPI(ML) 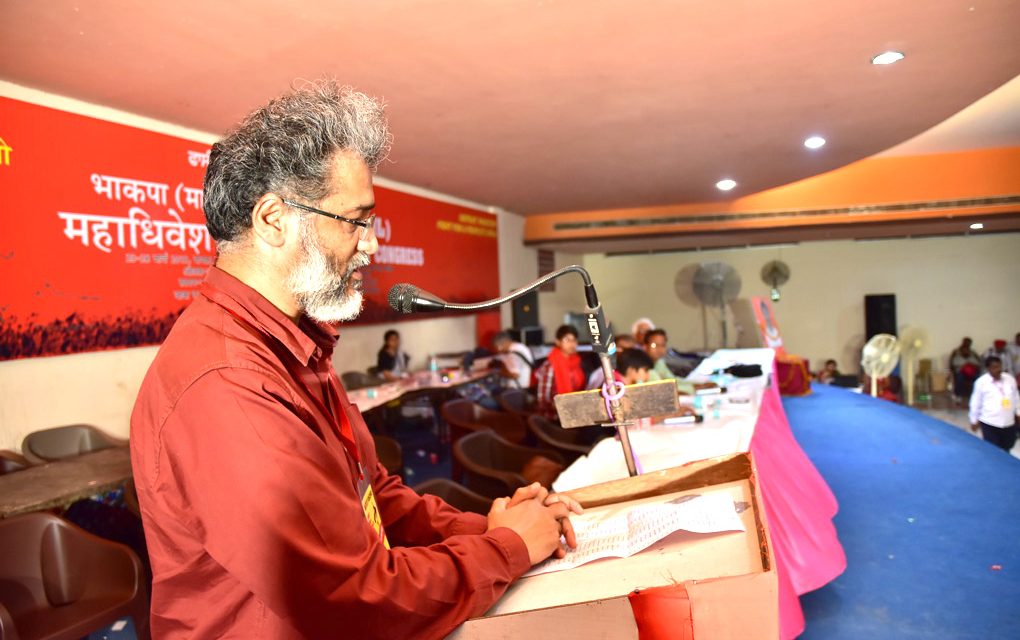 Dear comrades from various parties of the Indian Left, our esteemed guests from the international Left and progressive movement, and delegates, guests, observers, and volunteer comrades attending the 10th Congress of the CPI(ML),

It is my great pleasure to extend our revolutionary greetings and a very warm welcome to all of you to this inaugural session. Shortly before this Congress we all had celebrated the centenary of the glorious November Revolution. The year 2017 had also marked the fiftieth anniversary of the great Naxalbari peasant awakening. From the rostrum of the 10th Congress we salute this great historic legacy of the international and Indian communist movement and rededicate ourselves to the supreme mission of abolition of all kinds of exploitation and injustice and the attainment of complete human emancipation.

We are aware that we are meeting here today at a very critical juncture. Internationally, this is a juncture marked by continuing global economic crisis, massive inequality and relentless assault on the living conditions and basic rights of the working people. Accompanying this economic crisis is a renewed rise of fascist tendencies and forces riding on war and racist violence, rampant Islamophobia and state surveillance. We are dealing with an international political environment which has thrown up an American President as obnoxious and racist as Donald Trump, where the fusion or identification of the state and corporate interest has become so pervasive and complete/total that one can almost speak of a privatisation of the state itself.

But simultaneously we are also witnessing a very refreshing upswing in popular anti-capitalist anti-racist resistance across the world, including the heartlands of global capitalism like the US and Europe. This intensified popular resistance is generating a reassuring potential for a distinct leftward shift. The same Presidential election which sent Donald Trump to power had almost made Bernie Sanders the Democratic Presidential nominee, who would have been the most socialistic of US presidential nominees in the context of mainstream American politics.

In Britain, alongside Brexit we also see a pronounced Leftward shift in the policies and positions of the Labour Party under the leadership of Jeremy Corbyn. In Nepal, we have just seen the communists emerge as the leading political force in the country’s first elections held under the new republican constitution. The Tenth Congress of the CPI(ML) supports and welcomes every advance made by the Left and other progressive forces in various parts of the world.

Comrades, we are holding this Tenth Congress in the face of an unmistakable rise of fascism in India. The victory of the BJP-led NDA in the 2014 Lok Sabha elections followed by the rise of BJP-led governments in a record number of Indian states has emboldened the RSS, the core organisation which leads the BJP and a vast network of allied and affiliated outfits, to unleash its fascist agenda with unprecedented aggression and speed. The BJP today spearheading a neo-liberal policy offensive in every sphere, while simultaneously thoroughly polarising the society on communal lines and subverting and capturing the entire range of state and non-state institutions in furtherance of the RSS agenda. The manipulation of parliamentary procedures and subversion of institutions and constitutional offices has almost acquired the proportions of a parliamentary coup.

We now know for sure that the BJP is not just looking at another term in power by winning the next parliamentary elections, it is bent upon reshaping India in accordance with the Hindu supremacist blueprint of the RSS even as the latter marches towards its centenary in 2025. Behind the daily dose of hate and lies and state repression and privatised violence lie the undeniable trappings of Indian fascism that seeks to invoke and champion the most horrific features and regressive trends from our past, enforce the most bigoted ideas and prejudices on our minds and empower and unleash the most reactionary casteist, communal and patriarchal forces in our society. The enemies of liberty, equality and fraternity want to overturn the constitution of India and reshape the country to fit their Hindi-Hindu-Hindustan framework. The collaborators of British colonialism who betrayed India’s struggle for freedom now want to hijack and rewrite history by inflicting Savarkar over Bhagat Singh, Golwalkar over Ambedkar and Godse over Gandhi.

This design must be defeated. This disaster must be prevented. And it is to this most pressing challenge and urgent task of the hour that we are dedicating this Tenth Congress of the CPI(ML). We know we in the Left have lost a few crucial electoral battles, but these electoral setbacks are not going to decide the outcome of the ongoing war between fascism and democracy. The communists have always drawn their strength from the courage and determination of the people as they have fought heroically for their freedom and rights. Today as India once again witnesses a very powerful and inspiring wave of people’s resistance spearheaded by the workers and peasants, Dalits and Adivasis, students, youth and women, this growing resistance will only further galvanise the Left against the onslaught of fascism. Growing unity in action among various sections of the Left and dialogue and cooperation with every broader stream of resistance will enable us to halt the marauding march of the fascist forces. The unity of the people in struggles for livelihood, dignity and democracy will prevail over the polarising frenzy of communal hate.

The BJP and RSS have managed to spread their tentacles and bare their fangs in a veritable political vacuum. The Congress, which headed two successive UPA regimes from 2004 to 2014, became so badly discredited that the BJP had power handed over to it almost on a platter. The wholesale migration of almost the entire Congress unit in Tripura to the BJP in the recent Assembly elections once again highlighted the utter vulnerability of the Congress in contending with an aggressive BJP. A good number of regional parties and parties from the post-Mandal social justice camp have time and again joined hands with the BJP and enabled it to win an absolute majority on its own and a comfortable majority with its allies. The betrayal of Bihar Chief Minister Nitish Kumar enabled the BJP to hijack power through the back door even after the people of Bihar had rejected it resoundingly in the Assembly elections of 2015. The unity between the Samajwadi Party and BSP in the recent UP by-polls and the exit of Jitanram Manjhi and Chandrababu Naidu from the NDA have certainly brightened the possibilities of an electoral realignment of forces against the BJP, but such realignment alone could only result in a temporary defeat of the BJP.

For a decisive defeat of fascism, we need to change the political agenda and climate of the country and a spirited resurgence of the Left holds the key to such a political shift. If the BJP is out to destroy democracy, we must fight back to claim democracy for the common people of the country. If the BJP is bent upon falsifying and hijacking history, we must champion the glorious legacy of our freedom movement and the protracted struggle for social justice and women’s rights to call their bluff. If the Sangh brigade wants to redefine India and Indian nationalism on the narrow basis of Hindi-Hindu-Hindustan, we must defeat them by invoking the spirit of anti-imperialist unity and assertion of the Indian people and holding high the banner of people-first patriotism.

We are proud that the comrades of Punjab are hosting the Congress during the martyrdom week of Shaheed-e-Azam Bhagat Singh and his comrades Sukhdev and Rajguru. The legacy of Bhagat Singh provided the strongest formative impetus to the Left tradition in India’s freedom movement and once again it will show us the way to win real freedom and democracy for the Indian people. This hall of the Party Congress is dedicated to the memories of our comrades Swapan Mukherjee and Ganeshan and the rostrum is named after comrades Srilata Swaminathan and Jeeta Kaur, and we salute the memories of these departed leaders and rededicate ourselves to the mission for building the India of Bhagat Singh’s dreams. We once again extend our warm greetings to all of our Indian and international guests. Your presence strengthens our resolve to forge a greater unity of the left and all fighting forces and wage a powerful united resistance till the final victory over fascism for democracy and socialism.