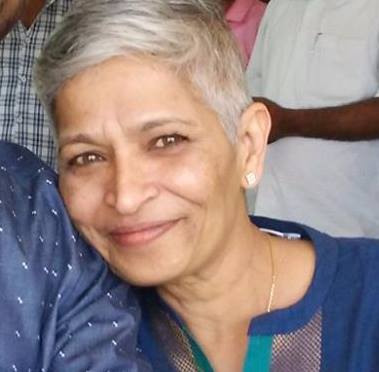 In an assassination that has shocked people all over the country, journalist Gauri Lankesh has been shot dead at her home in Bengaluru by unidentified men on a bike. Gauri Lankesh was a bold and intrepid independent journalist who wrote tirelessly against communal fascists in India. The manner of her death appears to be similar to the assassinations of Narendra Dabholkar, Govind Pansare and MM Kalburgi, in which the Abhinav Bharat, a saffron terrorist outfit, had been implicated. The fact that the killers of Dabholkar, Pansare and Kalburgi are yet to be punished is a comment on the impunity which these terrorists enjoy.

The rise of the BJP and the Modi regime has emboldened the forces of Sanghi terror in the country. They indulge in widespread threats of violence – and assassinations – to silence voices of dissent. Gauri Lankesh was one voice, who in spite of being convicted in a criminal defamation case by a BJP leader, had refused to be intimidated or silenced.

We demand justice for Gauri Lankesh. The anger against her assassination will only strengthen the determination of democratic forces in India to keep the flame of dissent alive and shining bright.