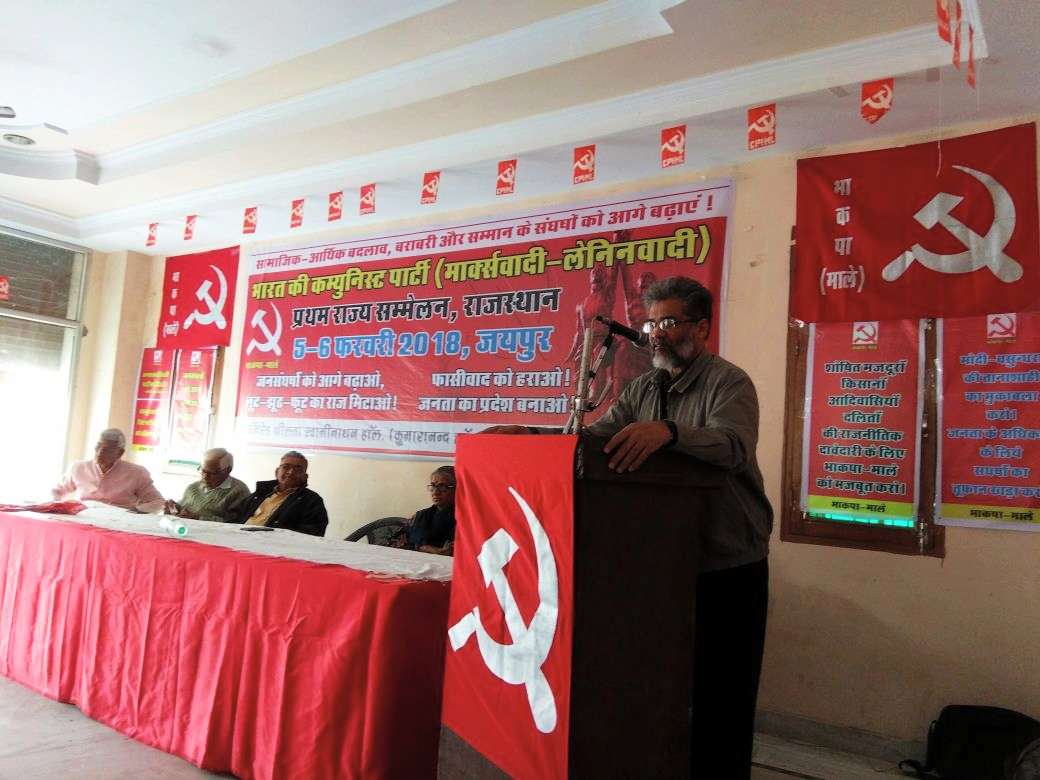 A two-day Rajasthan State Conference of the CPI(ML) was held in Jaipur on 5-6 February 2018. The dais was named after Comrade Vikas Mahto and the Hall after Com. Srilata Swaminathan, while the city was named Zafar Nagar in memory of martyred Com. Zafar Khan from Pratapgarh.
The Conference began with the flag hoisting by veteran comrade Shantilal Trivedi of Chittor followed by paying of tributes to comrade Srilata Swaminathan, comrade Zafar Hussien Khan, who was killed by Pratapgarh municipal staff for resisting the photography of women in the name ODF campaign, and comrade Vikas Mahto, Jaipur city secretary of CPI(ML) who passed away recently. The Open session was held to commemorate the first death anniversary of comrade Srilata Swaminathan. This was addressed by leaders of the left parties and progressive intellectuals including CPI Rajasthan state secretary DK Chhangani, CPI(M) Jaipur Secretary Sumitra Chopra, CPI(ML) New Democracy leader Kamal Singh, Jan Swasthya Abhiyan activist Narendra Guptra and CPI(ML) leader Shankarlal Chaudhary. The conference was inaugurated by CPI(ML) General Secretary Dipankar Bhattacharya.

Addressing the Conference Com Dipankar said that if the country is to be freed from the communal fascism which leads to killings like those of Pehlu Khan, Com Zafar Khan, Afrazul and so many others, the only way is to strengthen and escalate people’s struggles. The effect of the wide-spread mobilization of workers and farmers in recent times was visible in the recent Gujarat Assembly and Rajasthan By-poll elections.

The conference passed resolutions on current incidents and political issues: condemning the ‘honour’ killing of Ankit Saxena in Delhi and attempts to communalise this incident, demanding that the government should ensure the safety and security of those who choose an inter-religion or inter-caste marriage of their own free will; demanding that the movie Padmavat should be released in Rajasthan also in keeping with the SC order; condemning lynchings in Rajasthan, violence against dalits at Bhima Koregaon; demanding the release of Bhim Army leader Chandrashekhar; demanding the immediate arrest of the accused named in the Zafar Khan killing at Pratapgarh and a stop to the humiliation of the poor in the name of the Swachh Bharat campaign and stop photography/videography of the poor who are forced to defecate in the open; demanding rollback of the anti-worker amendments in the Labour Law that Rajasthan was the first state to pass; against saffronisation of schools in Rajasthan; and demanding full loan waivers to all farmers and ensure MSP to farmers as per the Swaminathan Commission recommendations and permanently lifting the ban on selling cattle and revocation of the law concerning this.

The Conference marked that Rajasthan is the top State in violence against dalits as per National Crime Record Bureau statistics and demanded that the government should immediately stop giving protection to feudal forces and ensure speedy arrest and justice in matters of attacks on dalits. The Conference noted that adivasis in the State have not been given pattas to land under the Forest Rights Act; even the pattas which have been given are much smaller compared to the actual kabja-lands. It was demanded that all adivasis in the State should be given pattas equal to their kabja-lands without delay, and that ‘khata’ rights of lands without named owners should be given to the poor. The Conference opposed the eviction of the poor (in the name of ‘land banks’) from lands on which they are settled. The Conference expressed support for the farmers’ movement in Rajasthan and the country.