Cracking Down on Freedom of Expression in BJP-ruled States 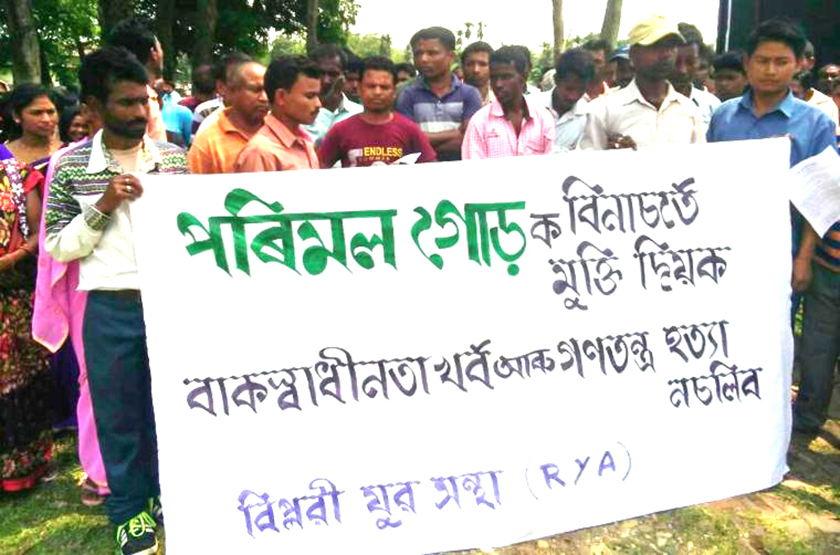 Comrade Parimal Gore, the Convener of Revolutionary Youth Association in Behali and also a district committee member of the CPI(ML), was arrested in Biswanath district, Assam on May 8, for sharing a post critical of the Assam Chief Minister on his Facebook wall. In a move reminiscent of the midnight knocks of the Emergency, the Biswanath police came to his home at one in the night in a posse of seven jeeps and arrested him.

On May 7, Comrade Parimal had shared a post by a Bipul Sharma, which had referred to the attack on the office of the All Assam Students’ Union in Dhemaji district by a Bengali Hindu outfit called Nikhil Bharat Bengali Udbastu Samanvay Samiti. The attack followed by a meeting by the Bengali outfit in support of the Modi Government’s proposal to bring amendments to the Citizenship Act to grant Indian citizenship to Hindu Bangladeshi migrants. The post shared by Comrade Parimal blamed the Chief Minister – BJP leader Sarabananda Sonowal – for having allowed the Bengali Hindu outfit to hold the provocative meeting that led to the attack on the AASU office. The post also accused AASU leader Samujjal Bhattacharya of corruption and fooling Assam’s people.

Contrast the manner of Comrade Parimal’s arrest – the very next day after he merely shared a sharp political post by someone else – with the fact that Bajrang Dal men who made rape and acid attack threats on Facebook against social activist Bondita Acharya in April have not been arrested yet by the Assam police!

Comrade Parimal has been booked under sections 120 (B) (criminal conspiracy), 153 (A) (promoting enmity between different groups), and 505 (2) (making statements conducing to public mischief) of the Indian Penal Code.

The RYA has held protests in Assam as well as all over India demanding the immediate release of Comrade Parimal and withdrawal of the absurd charges that amount to a crackdown on freedom of expression.

Meanwhile in Uttarakhand, Local Intelligence Unit men at Almora tried to spread rumours accusing a publicly held CPI(ML) state-level party school of being a meeting of ‘banned Maoists.’ On 13 May, preparations for the party school were on at the Prerna Sadan built by PWD workers at Almora. Comrades noticed that a strange man was pulling down the party flags and running away with them. He was then trying to spread rumours in public places saying “Run, the Maoists have come here.” On enquiry the comrades found out that he was a LIU agent.

A while later, when the party school was about to begin, a man who introduced himself as the Almora LIU in-charge Suresh Chand entered the hall and began making officious enquiries about the event. He declared that he knew CPI(ML) well and had no problems with CPI(ML) holding a meeting but was concerned about banned outfits holding meetings. Why did this gentleman imagine that a banned outfit would hold a meeting in a public place announcing its presence with flags? He did not answer.

After Suresh Chand left, supposedly having satisfied his enquiries, the matter did not end. Comrades found that he and other LIU men went to threaten PWD workers with loss of their jobs for having allowed their hall to be used by the CPI(ML)! It was only after party leaders called the District Magistrate and complained of the conduct of the LIU men that this harassment and rumour-mongering stopped.

On 15 May a delegation of CPI(ML) and CPI(M) leaders met the DM and SSP of Almora to complain of the worrying conduct of the LIU – which instead of collecting and imparting intelligence for the police was spreading rumours and issuing threats against democratic activities! At whose behest was the LIU of Almora behaving in this manner in BJP-ruled Uttarakhand?