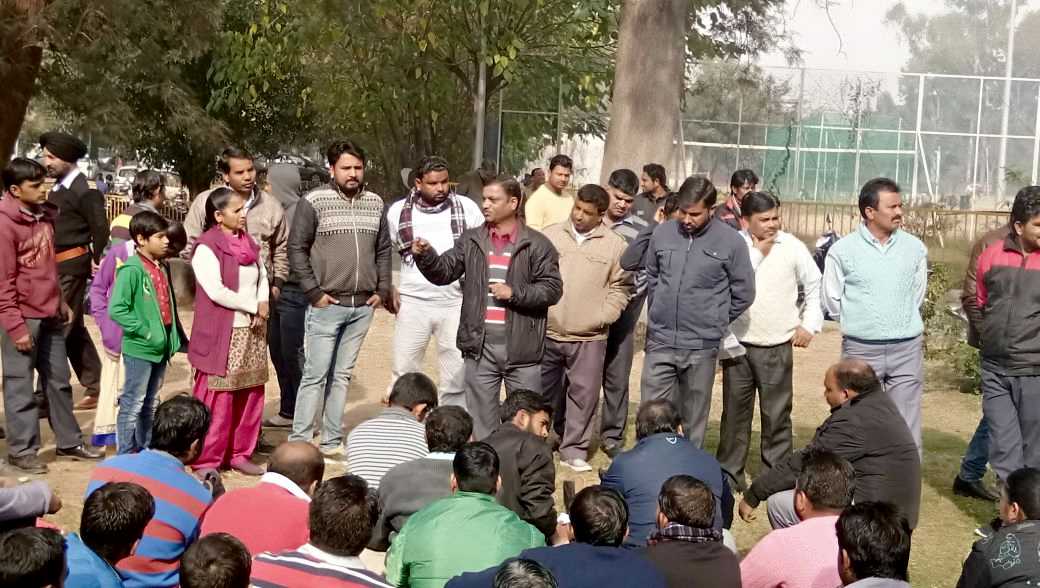 AICCTU organized an awareness meeting for the contract workers working in PGI, Chandigarh. The workers shared their problems and discussed strategies to address the concerns. Com. Prabhat Singh chaired the meeting.

AICCTU’s National Secretary Com. Satish Kumar who was also present in the meeting, made the workers aware about the movement that has been going on for the EPF, ESI and same wage for same work for contractual workers. Com. Satish said that only if PGI contract workers across ranks unite to strongly raise their demands in front of the government and strategize together only then the government could be forced to think about these concerns seriously and take a decision on them.

Union leader Com. S.D. Sahota shared that the cases that have been filed in the court cannot be fought without funds and hence the elected unions must also inspire the contract workers and form strategies for fund collection. He shared displeasure that the elected unions so far have been unable to address the concerns of the workers because of which the contract workers are having to face different problems on a daily basis. Com. Prabhat informed the workers about some of the positive steps that have been taken up by the labour officer after concerns were shared with them.

During the meeting issues of non-payment of wages to the hospital attendants, medical record clerk, receptionist, counter clerk, lift operator by the 7th of every month by a company called TDS group was also raised. Following this a demand was formulated that seeing the irregularities of the contractor of the TDS group and the exploitation of workers by the company, that the services of this company must be immediately stopped. Written complaints to this effect have been submitted to the PGI administration even on earlier occasions. It was also brought to the notice that in PGI, contractual supervisors working under Sudarshan Facility Private Ltd. And B.V.G. limited have not been provided with Diwali bonus, arrears of pay increase. Further, for past two years they have not even been given salary based on the DC rate. Any complaint made is responded by threats of taking away their jobs. The meeting resolved to inspire more workers to come together and take forward the struggles for these demands by organizing the workers.