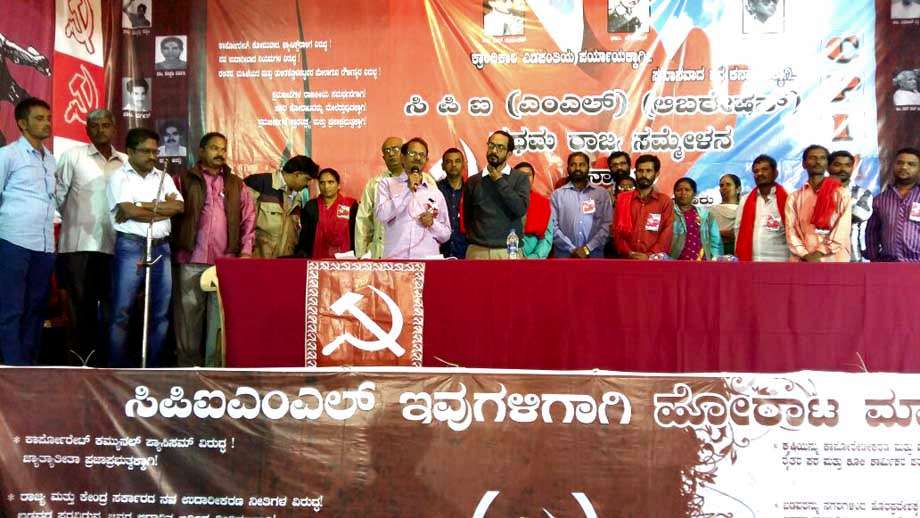 The CPI(ML)’s First State Conference in Karnataka was held on 2-3 December. Delegates from Bengaluru, Davangere, Koppal, Mangalore, Bellary and Mysore districts congregated at Bengaluru for the conference. Guests from Kerala, TN and AP were also present. Com. Murthy was the Central Observer deputed by the Party for the Conference. The Presidium consisted of Com. Lakshminarayana, Com. Nirmala, Com. Jawaraiah, Com. Ramappa and Com. Bharat.

The Conference was kicked off by Com. Indrani doing the honours of hoisting the Party flag, while revolutionary slogans rang in the air. National General Secretary Com. Dipankar Bhattacharya inaugurated the Conference and laid out the tasks and challenges before the Party in the current situation. He recalled the revolutionary work of Co. Shankar, Com. Gurumurthy. Com. Shivaraman, Com. Narayan Singh in the State over the past three decades that has now seen fruit as the Party grows in Karnataka. Recalling the legacy of 100 years of the November Revolution and 50 years of the Naxalbari uprising he drove home the lesson that when the most oppressed sections organize and fight then the mightiest enemy can be felled. He spoke of the need for unity in struggles in today’s context without sacrificing the independent growth of the Party in its work. In particular he focused on the need to realise Ambedkar’s dream of annihilation of caste as also the oppression of women and the need for the Party in Karnataka to be at the forefront of these struggles. The biggest challenge today before the country is the open onslaught of corporate communal fascist forces and the Party has to be at the forefront of the struggles and should earn a reputation as the fighting force of Karnataka. He concluded by urging all delegates to defeat BJP/RSS’s agenda of making Karnataka the communal laboratory of the South and prepare the ground for a revolutionary ML movement across the State.

Three draft Reports were presented and taken up for discussion at the Conference: (1) Karnataka’s Political Situation and Our Response; (2) Party History in Karnataka; (3) Work Sum Up and Future Plans.

The report on “Karnataka’s Political Situation and Our Response” highlighted the present crucial juncture as both the Vidhan Sabha and Lok Sabha elections are fast approaching. With people realising that Siddaramaiah’s “Bhagya” schemes are mere gimmicks, the Congress is playing dominant caste politics to offset its effect; on the other hand, the falsehood of Modi’s promises of development and the Sangh Parivar’s open communal offensive against Dalits and minorities, and the murderous agenda of silencing dissenters like MM Kalburgi and Gauri Lankesh stands exposed.

The Draft report “Recollecting Party’s Journey in Karnataka” traced the journey of the Party from Naxalbari to Bhojpur and other parts of the country including Karnataka. The Draft Report “Work Sum and Plans” traces the activities of our mass organizations and the party in great detail while summarizing the experience we have gained in Karnataka to understand the challenges in party building in Karnataka.

All three draft reports were read out to the house and delegates were called to respond. Delegates from all the districts aired their views on the drafts and made several suggestions, which will be incorporated while finalising the Reports. Thereafter the Presidium proposed that the Drafts be adopted to which there was unanimous consensus.

Com. Balasundram from Tamil Nadu and Kerala State Leading Team Secretary Comrade John K Erumeli also addressed the Conference and gave their revolutionary greetings on the occasion of the First State Conference and reminded the delegates of the urgent and necessary tasks before the Party in today’s context.