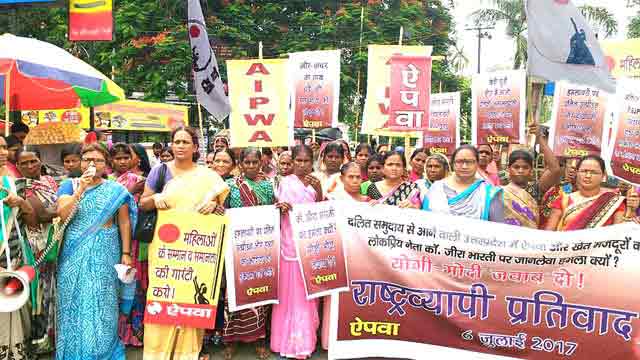 Comrade Jeera Bharti is a leader of the CPI(ML) and All India Progressive Women’s Association (AIPWA) in Mirzapur, district, Uttar Pradesh. Hailing from the Dalit community, she organizes agricultural labourers – most of whom are women and men from oppressed castes – for their wages, dignity and rights. Comrade Jeera Bharti was the CPI(ML) candidate in the 2014 Parliamentary elections and enjoys great respect in the area as a strong defender of the rights of workers, women, Dalits and the poor. She led a recent movement for wages of agricultural labourers due to which daily wages were increased to Rs 100. This movement enraged the feudal landlords in the area.

On the night of 3 July, she was returning from the CPI(ML)’s Mirzapur Block Office to her village (Riksha Khurd) on her bicycle, with her 14-year-old son. When she reached her village, her way was blocked by Santu Patel, a local landlord from the dominant Kurmi community, and his family members. He abused her, grabbed her hair and threw her on the ground. When her son rushed up to his mother’s rescue he too was beaten up. Santu Patel and his family members including some female members of his family together thrashed Comrade Jeera and disrobed her – in the presence of several other people from the local dominant castes. Comrade Jeera dialed the police helpline, but the police took an hour and a half to arrive on the scene. 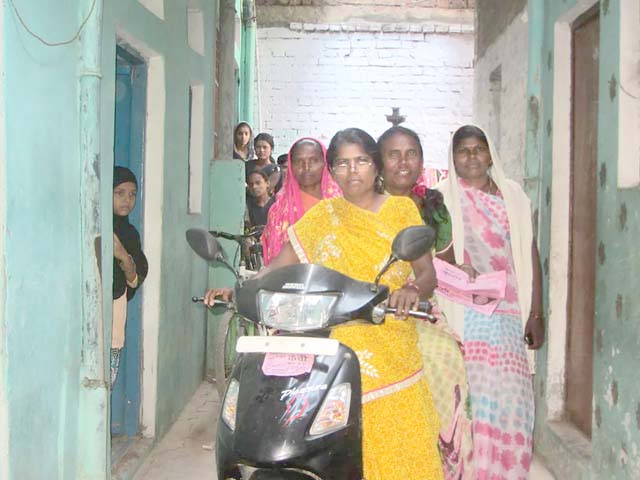 On 4 July, Comrade Jeera Bharti recorded her FIR at the police station. But BJP MLA from Marihan, Rama Shankar Patel, himself from the dominant Kurmi community, also came to the police station accompanied by a large number of his supporters. Under this political pressure, the police refused to invoke the relevant Sections from the law against violence on women and the Scheduled Castes and Scheduled Tribes (Prevention of Atrocities) Act pertaining to disrobing and assaulting a Dalit woman. It is shameful but not surprising that a MLA from India’s ruling party should himself demonstrate at a police station to defend people who committed gender and anti-Dalit violence.

After the FIR filed by Comrade Jeera, the accused party themselves filed an FIR of sexual harassment against her 14 year-old son and her husband. That this allegation is completely fabricated is proved in many ways. It boggles the imagination that a Dalit child and his father would enter a dominant caste Patel settlement in the dark and assault women there. But if this is true, why did no one from the Patel settlement make a call to the police that night – why did Comrade Jeera herself, instead, call the police? To institute “false, malicious or vexatious suit or criminal or other legal proceedings against a member of a Scheduled Caste or a Scheduled Tribe” is itself an atrocity and a crime under the PoA Act – Section 3 (p).

This attack on Comrade Jeera is symptomatic of the manner in which dominant caste and feudal elements feel emboldened by the Yogi regime to launch violent attacks on activists and people from the Dalit community. The attack on Dalits at Saharanpur followed by arrest of the Bhim Army leader; the manner in which people from the Musahar community of Kushinagar were demeaned by giving them soap to ‘clean themselves’ in preparation for Yogi’s visit; preventing Dalit activists from Gujarat from entering Uttar Pradesh because they were preparing to present Yogi with a 125 kg soap cake in response to his act of demeaning the Musahars; and arrest of well-known Dalit activists for holding a press conference has now been followed by the assault on Comrade Jeera Bharti.

AIPWA held demonstrations all over the country on 6th and 7th July, demanding that the assailants of Comrade Jeera Bharti be booked under the relevant sections of the SC/ST (PoA) Act and Criminal Law (Amendment) Act 2013.  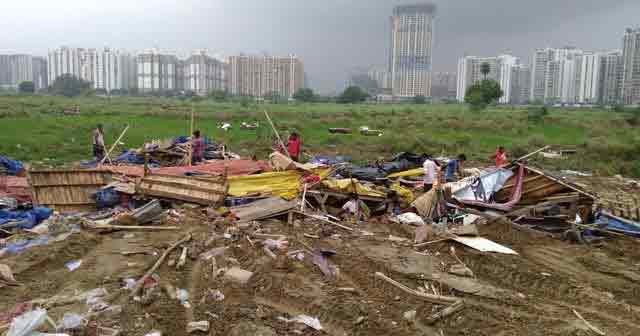 Vandalism by some of the workers caused what even the police admit was mild damage. The police unleashed firing and lathi charge against the protesters. An FIR was filed by Zohra against her employers, while an FIR was also filed against protesters. Since then, the police has conducted indiscriminate raids to detain and arrest men from the domestic workers’ families, and 13 have been arrested. Though no resident of Mahagun Moderne was injured, the arrested workers have been booked for “attempt to murder”!

However, no action whatsoever has been taken against the employers on Zohra’s complaint. Meanwhile some residents of the Mahagun society began spreading the canard that Zohra and other domestic workers were “illegal Bangladeshis” – this is an obvious lie because the police confirms that they all have Aadhaar cards without which they are not allowed to enter the society complex at all. This hate campaign was picked up the RSS outfits and amplified in media and social media. A video was circulated online claiming that ‘a mob of 500 Bangladeshis rioted and attacked the NOIDA residents.” Mahagun Moderne residents adopted a policy refusing to employ domestic workers from Bangal and Odisha!

The local BJP MP Mahesh Sharma and Culture Minister in the Modi Cabinet addressed Mahagun residents, and declared that the protest by workers was clearly a case of “mob violence” and ensured them that the accused in the case “never get bail”. He fully backed the accused employers of Zohra and asked BJP workers to intimidate and attack human rights workers who were taking up the workers’ cause, saying, “There is no doubt that the family is not at fault. A few people, through NGOs, media, in the name of human rights are running their shops and trying to give a communal colour to the incident. I have told my party workers to give befitting reply to them.” In a statement reeking of communal and class biases towards the workers, he said “Jaantey bhi hai yeh kaun hai, par anjaan banne ki koshish kartey hai, kyuki humaari zaroorat hai (we know who these people are but pretend ignorance because we need their help).” This statement implies that the workers are indeed Bangladeshi/Muslim and therefore deserving of hate and derision, but the residents have no option to but to employ them to do their dirty work! He used the insulting word ‘naukrani’ (female servant) instead of referring to them as domestic workers.

Following the MP’s open endorsement of discrimination and clean chit to employers, the NOIDA development authority razed the slums of the domestic workers to the ground, leaving them homeless in heavy rain.

The team met Zohra’s mother-in-law who spoke of the climate of fear among the workers, “Police came and broke down doors to hunt for the men.” Other workers in the area said “we were born in this country and live and earn a living in this country, but this is the first time we are being branded as Bangladeshi infiltrators.” (The team’s report, while noting that the domestic workers of NOIDA are all from West Bengal, also noted that even those who come from Bangladesh or Nepal to labour in India, are not ‘infiltrators’ but economic migrants.) They also met several of the men who had been detained by the police and then released.

Workers told them about the inhuman and humiliating conditions imposed on them in the posh colonies of Delhi and the National Capital Region including NOIDA and Gurgaon. The class apartheid includes rules such as separate lifts for domestic workers, frisking of workers as they enter and leave the apartment complexes, and so on. It is common for workers to be paid a pittance and for monthly payments to be indefinitely delayed, and there have been many atrocities done by employers to domestic workers.

The Government of India has not ratified ILO (International Labour Organization) Convention No.189 on Decent Work for Domestic Workers, and has failed to bring India’s own laws in line with this Convention. Instead, Ministers of the Government endorse indecent and inhuman working conditions, referring to domestic workers in feudal terminology as ‘naukar/naukrani’ and giving clean chits to employers accused of violence against a woman domestic worker. 