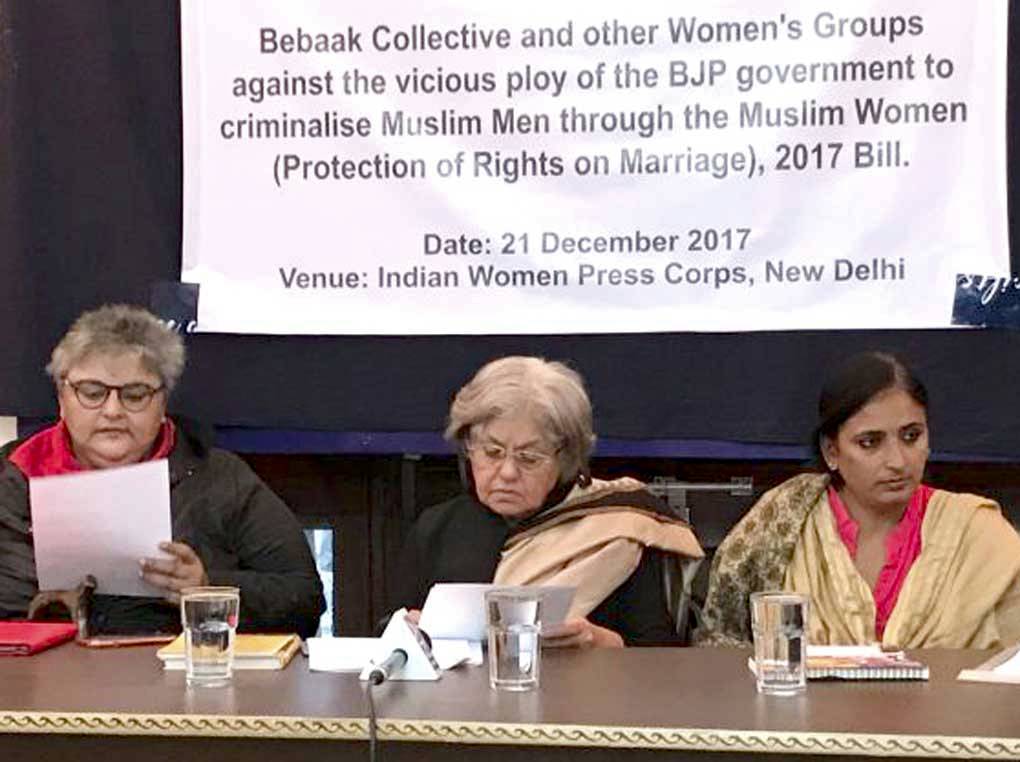 The Muslim Women (Protection of Rights on Marriage) Bill criminalising instant triple talaq is flawed, contradictory, and has been passed by the Lok Sabha without any consultation with the very women the Bill claims to protect. The Supreme Court judgement that held instant triple talaq to be unconstitutional did not recommend any criminal law to make the practice punishable. Many of the Muslim women’s groups that had petitioned the Supreme Court to invalidate instant triple talaq have opposed crucial clauses of the Bill. Why, then, was the Modi Government in such a hurry to pass the Bill without even sending the Bill to a Standing Committee for further deliberation, as is the usual practice?

Instant triple talaq – being a legally and constitutionally invalid form of divorce – is a civil wrong calling for civil remedies. If any husband resorts to this practice, what is needed is procedures for mutual conciliation and counselling that can either salvage the marriage or ensure that the husband uses legally valid procedures to apply for divorce. A wife appealing against the practice wants her husband to remain accountable to the marriage and continue to provide for herself and their children – jailing the husband achieves exactly the opposite.

The Bill makes instant triple talaq (talaq-e-biddat) a cognisable, non-bailable offence – which means that a Muslim man can be arrested and prosecuted based on a third-party complaint by any “informer” even if the alleged victim – his wife – does not make any complaint. Such a provision suggests that the Government is not concerned with protecting the interests of Muslim women, and is instead seeking to make the law a handy tool to arbitrarily arrest and harass Muslims, like the beef ban laws. It is pertinent here that the same Modi Government is trying to make the 498A law against dowry harassment and domestic violence a non-cognisable, bailable offence, claiming that this law protecting women across communities from domestic cruelty and violence is prone to ‘misuse’ and harassment of husbands and in-laws!

The haste to selectively criminalise instant triple talaq raises questions about the Government’s real motive. Arbitrary abandonment by husbands without legal divorce proceedings is a wrong that is commonly faced by women of all communities, not just Muslim women. BJP leader Meenakshi Lekhi declared that Muslim women need no longer worry since they have a brother like Prime Minister Modi. What about women who have a husband like Prime Minister Modi? Modi neither accords Jashodaben, his wife of four decades, the recognition and companionship to which a wife is entitled; nor has he ever applied for divorce. According to census data, close to 20 lakh Hindu wives suffer a similar situation of being unilaterally separated from their husbands. The only difference between the plight of such Hindu women and their Muslim counterparts is that the practice of such arbitrary and one-sided separation has no term like ‘instant triple talaq’ among Hindus. If unilateral separation imposed by Hindu husbands like Modi on their wives is not a crime requiring a jail sentence, why a different standard for Muslim husbands?

The Bill is riddled with contradictions. For instance, it has provisions for child custody – implying therefore that it treats instant triple talaq as amounting to divorce, whereas the SC verdict makes it clear that this is not the case! Moreover, the Bill invalidates several of the rights recognised by the Protection of Women From Domestic Violence Act (PWDVA) 2005. PWDVA 2005 provides for monetary relief that is consistent with the standard of living to which the wife is accustomed; the instant triple talaq Bill instead uses the demeaning phrase ‘subsistence allowance’ and does not spell out how this allowance is to be calculated. Unlike the PWDVA 2005, the instant triple talaq Bill does not provide either for the right to residence nor for physical protection from domestic violence. If existing laws like 498A, PWDVA 2005 and Section 125 CrPC (which provides for maintenance of a wife) already provide better legal protection for wives than the instant triple talaq Bill, what is the rationale of the Bill?

The Modi Government’s claims of being protectors of Muslim womanhood or women’s rights appear especially cruel when one recalls how Ministers in the Modi Cabinet have openly defended those accused of raping Muslim women during communal violence in Muzaffarnagar; or how the current UP Chief Minister and BJP star campaigner Yogi Adityanath watched approvingly as a leader of his organisation gave a speech calling for the corpses of Muslim women to be dug up and raped. The Prime Minister has not offered a word of condolence to the wife and daughters of Afrazul, the victim of a gruesome terrorist killing – even as Bajrang Dal men, who like the PM are part of the Sangh family – hold rallies celebrating Afrazul’s killer. Innumerable BJP leaders have defended rape-accused fraudmen like Ram Rahim and Asaram, and have prescribed and organised violence against women in the name of preventing ‘love jehad’, which is the BJP’s term for marriages in which a Hindu woman chooses to marry a Muslim man.

The Modi Government’s haste in passing the ill-conceived and poorly drafted instant triple talaq Bill is in contrast to its failure to table and enact the Bill providing 33% Reservation for women in Parliament and Assemblies that has languished for two decades.
The instant triple talaq Bill must be set aside by the Rajya Sabha, and no fresh legislation on the subject should be drafted without a thorough consultation with Muslim women’s groups and women’s organisations. Most personal laws and laws relating to marriage, divorce, maintenance, and child custody – not only Muslim personal laws – have deep patriarchal biases and demand change. Such changes need to be discussed, debated and decided in a framework of gender justice, rather than the biased, selective, and Islamophobic framework adopted by the BJP. Communal politics must not be allowed to use lip service to gender justice as its tool. 

The MLAs were appointed as legislative secretaries in 2015. The AAP argued that since the appointments were set aside by the Delhi High Court in 2015, the EC could consider the question to be void. But in June 2017, the EC announced that the case would continue. However, the EC did not hear the case for several months, and its decision now, on the eve of the Chief Election Commissioner’s retirement, raises questions about its timing and the transparency and impartiality of the EC’s process. Instant Triple Talaq Bill: Hasty, Biased, Unjust The fact remains that states like Rajasthan, Karnataka, Chhattisgarh, Madhya Pradesh, Jharkhand and Punjab are able to appoint MLAs as parliamentary secretaris, by enacting laws to save such posts from disqualification. Delhi also sought to amend the Legislative Assembly (Removal of Disqualification) Act in 2015 to allow MLAs to hold posts of parliamentary secretaries, but the amendment was denied approval by the Lieutenant Governor and the Central Government. The withholding of the Amendment proposed by the Delhi Assembly and now this wholesale disqualification of MLAs both amount to a deliberate undermining of the Delhi Assembly and the people of Delhi who elected these MLAs.

The CPI(ML) condemns the EC’s decision to disqualify the MLAs which is not only disproportionate and excessive, but is also blatantly biased and discriminatory. The CPI(ML) also appeals to the people of Delhi to rise against this undermining of democracy and foil the BJP’s bid to subvert the people’s mandate and usurp power by conspiratorial means. 