The Aadhaar Tyranny Must End! 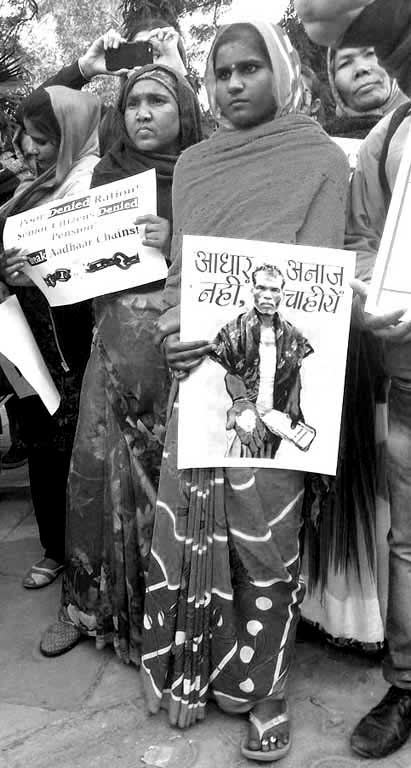 Last October, Santoshi Kumari, a young girl from Simdega district of Jharkhand died of starvation after her family stopped receiving any rice from the public distribution system for several months as their ration card had not been electronically linked with Aadhaar number. Santoshi died a horrific death after starving for eight days and as she was dying, she kept asking her mother for bhat bhat (rice, rice). Exactly one month after Santoshi’s shocking death, in Bareilly of Yogi’s Uttar Pradesh, Shakina Ashfaq, a fifty year old paralyzed woman died after five days of cruel starvation as her family was denied food grain because she could not go to the ration shop for her Aadhaar fingerprint authentication. Shakina’s family used to take her to the shop in a rickshaw to authenticate, but this last time she was too ill and even unable to move. These are not deaths; these are killings – and only a few snapshots of the bizarre Aadhaar tyranny of the ruling regime. The so-called grand Aadhaar project of the Modi Government stands proven today as a cruel and systematic tool for exclusion, and also as an unashamed instrument of surveillance and violation of privacy by both the Government and the corporates. The poor of the country was robbed off their rights and basic services like food rations, healthcare, old age pensions, MNREGA work and wages, and education in the name of Aadhaar linking madness. On the other hand, we witness the disturbing lack of privacy of the data of citizens collected under Aadhaar.

A Nightmare for the Country’s Poor

Aadhaar was publicized by the Government as an efficient tool to check leaks in welfare schemes and to prevent fraud. The PM himself declared in the parliament that because of “Aadhaar and technology”, 3.95 crores bogus ration cards had been discovered. Just after this claim, in a “corrected statement” of the Government, the number of bogus ration cards dramatically came down to 2.33 crores! However, RTI activist Anjali Bharadwaj has shown how the Government has failed to provide any data to back up the claim regarding fake ration cards (The Wire, August 9, 2018).

Instead of improving welfare delivery, Aadhaar has turned into a tool of exclusion. The deaths of Santoshi and Shakina are no aberration. In BJP-ruled Jharkhand alone, there are at least four Aadhaar linked starvation deaths in past four months. Noted economist Jean Drèze has elaborated on the severity of Aadhaar related exclusion from the public distribution system in Jharkhand: “Except for its tragic culmination (of Santoshi’s death), there is nothing unusual about this story. Many people in Jharkhand have been victims of similar deprivation of food entitlements during the last few months. The main reason is that Aadhaar-based biometric authentication is now compulsory in about 80% of ration shops in the state. It requires at least one member of the family to have an Aadhaar number correctly seeded into the system, which is not a trivial matter by any means. In addition, it requires internet connectivity, a working point of sales machine, and successful fingerprint recognition. Despite various safeguards, such as the “one-time password” option, whereby those who are unable to authenticate themselves using fingerprints can get a password on their mobile phones, the system often fails.” (Scroll.in, October 21, 2017). A recent survey of the public distribution system of Jharkhand by student researchers and Drèze, of villages where Aadhaar authentication is compulsory, showed that the exclusion rate, defined as the proportion of cardholders unable to buy their food rations is shockingly 36%. The worst sufferers of this exclusion, the study demonstrates, are most vulnerable sections of society like widows and elderly couple.

Aadhaar enabled starvations are not only limited to the state of Jharkhand, rural poor are continuously getting excluded from the public distribution system in the name of Aadhaar across the country – from Rajasthan to Karnataka to Uttar Pradesh. Three Dalit brothers – Narayana, Venkataramma and Subbu Maru Mukhri died of starvation July last year near Gokarna town of Karnataka after the family was denied rations for several months because they did not have Aadhaar card.

According to the data of the recent Global Hunger Index (GHI), India ranks 100 of 119 countries in 2017, with a score of 31.4 of 100 (with 0 being best and 100 the worst), India’s 2017 GHI falls at the high end of the “serious” category (IndiaSpend, October 12, 2017). More than a fifth (21%) of India’s children suffers from low weight and height, reflecting acute undernutrition. Massive deprivation – lack of access to food, drinking water, sanitation and housing – combined with this recent absurd and cruel exclusion in the name of non-possession of Aadhaar or Aadhaar related technical glitches are systematically rendering more and more people of our country permanently vulnerable to acute malnutrition, hunger and death.

Intensified hunger is the logical outcome of the Aadhaar tyranny. Further, the mandatory Aadhaar is excluding children from mid-day meal entitlements, rural poor from MNREGA jobs, migrant children from schooling system, HIV positive people from the government treatment programs, students with disabilities from accessing scholarships. To sum up, the Aadhaar madness has become a nightmare for the people of this country, especially for the poor and the marginalized.

Long back in 2009, the former IB chief and now the National Security Advisor Ajit Doval had openly acknowledged that the welfare claims for Aadhaar were mere excuses to access private data of citizens: “…it is being projected as more development oriented, lest it ruffle any feathers. People would be unwilling to give up their right to privacy.” (Tehelka, August 22, 2009). The Aadhaar act itself allows the state and corporate companies to access private data of citizens which will inevitably lead to profiling and surveillance. Usha Ramanathan wrote: “a company called TrustID offering ‘India’s 1st Aadhaar based mobile app to verify your maid, driver, electrician, tutor, tenant and everyone else instantly.’ The app boasts it can do this in “less than a minute”. Its punchline: ‘Shakal pe mat jaao, TrustID pe jaao.’ Don’t go by the face, use TrustID. Think about what this means. A private company is advertising that it can use Aadhaar to collate information about citizens at a price. It says this openly, even as a case about the privacy of the information collected for the biometrics-linked government database is still pending in the Supreme Court.” (Scroll.in, March 16, 2016). Thus private companies will be able to profile citizens for commercial purposes and when the data travels back to the Government, the ruling regime can potentially use that to discriminate and target individual citizens. In the currently progressing Supreme Court hearing on the constitutional validity of Aadhaar, Senior Advocate Shyam Divan brilliantly sums up the Aadhaar menace in his opening statement: “This leash is connected to a central data base that is designed to track transactions across the life of the citizen. This record will enable the State to profile citizens, track their movements, assess their habits and silently influence their behavior. Over time, the profiling enables the State to stifle dissent and influence political decision making. As the Aadhaar platform extends to private corporations, the degree of tracking and extent of profiling will exponentially increase. Several State governments have started using the Aadhaar platform to build profiles of residents that is reminiscent of totalitarian regimes.” (LiveLaw.in, January 17, 2018).

Further, we have witnessed shocking leak of data from so-called secure Aadhaar system. Last year, the Government itself admitted in the Parliament that 210 official websites were found displaying Aadhaar numbers with demographic data (Scroll.in, January 17, 2018). Recently, Tribune journalist Rachna Khaira’s investigation has exposed how the Aadhaar data was being sold by anonymous sellers over WhatsApp for Rs. 500! In response, the Aadhaar’s overseeing body; the Unique Identification Authority of India (UIDAI) has shockingly filed a case against Khaira under provisions of the IPC, IT Act and Aadhaar Act. This intimidation clearly demonstrates an alarming pattern as this is the fourth instance of attack on free speech in context of targeting of Aadhaar whistleblowers in past one year.

The forcible imposition of Aadhaar and the exclusion of the people from their rights and basic services have witnessed massive anger and protests. The defenders of Aadhaar, to desperately manipulate public opinion through corporate media and troll armies, have claimed that the oppositions of Aadhaar are only stemming from certain elite paranoia. (Altnews, 17th January, 2018). One leading journalist has tried to claim that Aadhaar paranoia is being whipped up by elite people who consume ‘wine and cheese’ every evening!

But the protests across the country tell a completely different story. The beginning of the year has seen protests against Aadhaar all over the country. In the Break Aadhaar Chains protest in Delhi’s Parliament Street on 12th January, working class women have shared their narratives of cruel denial of ration because of either non-possession of Aadhaar card or biometric failure. Elderly pensioners have narrated how they are facing massive difficulties using biometric authentication. The CPI(ML) organised protests in rural Bihar and Jharkhand against compulsary Aadhaar linkage. The people of the country have said it loud and clear, as the posters and slogans of Delhi protest reverberates – Aadhaar nahi, anaaj chahiye (We don’t need Aadhaar, we need our rations) and Aadhaar nahi, pehle Adhikar toh do (Say no to Aadhaar, give us our rights)! 

64 year-old Premani Kunwar, a widow, died of hunger in Danda block, Garhwa district, Jharkhand, after she was denied food rations because of alleged Aadhaar irregularities. The SBI had diverted Premani Kumar’s pension to another account in the name of her late husband’s first wife Shanti Devi, also deceased long ago. The Right To Food Campaign said that as per the UIDAI report, the name in Premani Kunwar’s Aadhaar (UID no XXXXXXXX7606) was changed to ‘Shanti Devi’ on 23 September 2015. The UIDAI report “fails to explain how, despite this change, Premani Kunwar continued to receive her pension in her Aadhaar linked bank account till September 2017. There is also no explanation of how a bank account could be opened in the name of Shanti Devi in 2007, given that she died over two decades ago.” In spite of the ration dealer having authenticated Premani Kunwar’s biometric details, she was not given rations, and had to beg and borrow grain from her neighbours. Her teenage son has testified that his mother died of starvation. Now, the Jharkhand Government, in order to cover up the Aadhaar-linked starvation death, is blaming Premani Kunwar and her surviving family members of fraud, and it has also booked an FIR against those CPI(ML) activists who blew the whistle on the starvation death! An FIR accuses CPI(ML) activists Birendra Chowdhary, Pramukh, Kalicharan Mahto and Sushma Mahto of “causing disruption of government inquiry and for instilling fear in the government inquiry team.”

Recall how the Jharkhand CM Raghubar Das accused the Dalit mother Koili Devi of bringing a “bad name” to her village by alleging that her daughter Santoshi Devi died starving and crying for “rice, rice”, after her ration card was cancelled due to failure to link it to Aadhaar. Later, the Jharkhand food and civil supplies minister admitted that Santoshi’s ration card was wrongly cancelled.

Since Premani Kunwar’s death, another widow, 67 year-old Etvariya Devi, died of starvation and exhuastion in Majhianv block, Sonpurva village after she and her family was deprived of ration and pension due to failure of Aadhaar biometric authentication.