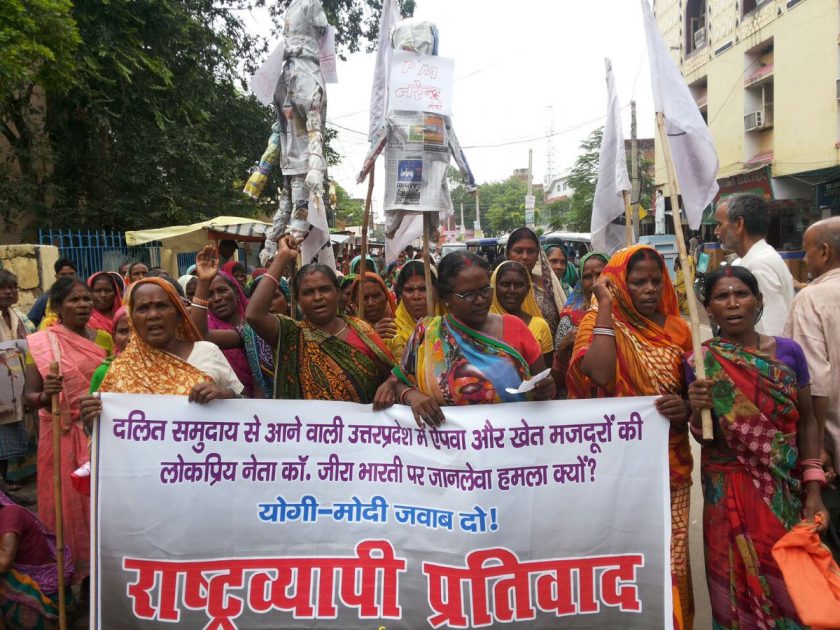 Com Jeera Bharti was attacked in Mirzapur on the night of 3 July by landlord Chatru Patel and his family members when she was returning home on her bicycle. The police arrived at the village only after one and a half hours. When Com Jeera went to the thana to file an FIR, the local MLA arrived with his supporters and forced the police not to register a complaint under the SC/ST Act or the laws against violence on women.

After this incident AIPWA gave a call for countrywide protests on 6 and 7 July. In Ranchi, protest marches and meetings were taken out in Garhwa and Ranchi and effigies of UP CM Adiyanath were burnt. A protest march was taken out in Patna led by Comrade Meena Tiwari and other AIPWA leaders. The speakers at the meeting said that ever since the Yogi government came to power the morale of feudal criminals has reached new heights and the attack on the dignity and life of Comrade Jeera is the latest in a long list of examples of this. They condemned the anti-democracy and anti-Constitution policies and action of the BJP governments at the Centre as well as in BJP-ruled States.

The CPI (ML) held state-wide protests in UP against feudal attacks on dalits including the attack on Party and AIPWA and AIARLA leader Comrade Jeera Bharti in Mirzapur. AIPWA also declared countrywide protests on 6 and 7 July.

CPI (ML) and AIPWA activists held protest marches, meetings and effigy burnings in Lucknow, Mirzapur, Sonbhadra, Ghazipur, Mau, Ballia, Deoriya, Chandauli, Bhadohi, Allahabad, Gorakhpur, Sitapur, Gonda, and other districts. Earlier, a dharna was held at Lakhimpur Kheri. Memorandums were submitted to the Governor through the District officials with the following main demands: arrest of the goons who attacked the honour and life of Com Jeera Bharti; action against police raid on the Party office in Varanasi; lift the stay on recruitment commissions in the State and release of those arrested while protesting outside the UP Assembly to demand employment opportunities; end attacks on freedom of expression and right to dissent like the arrest of dalit intellectuals in the Press Club; revoke cases against students who showed black flags to CM Adityanath; and release of dalit leader Chandrashekhar.
Protests were also held in Assam, Tripura and many other states.